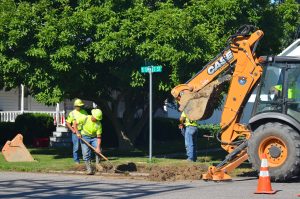 *To access and download plan holder documents (contract, plans, and addenda), you must be a plan holder for that project with a login. Request access for each project via the BMU Bid Request Form.

ADVERTISEMENT FOR BIDS: Sealed proposals will be received by the City of Bryan at the office of the Clerk-Treasurer at 1399 East High Street, 2nd Floor, Bryan, Ohio, until 12:00 p.m., local time, on MARCH 26, 2019 and at that time and place will be publicly opened and read aloud; said proposals shall be for the project known as the Fairview Drive Directional Boring Project

A complete set of bidding documents, including plans and specifications for the project will be available Monday through Friday from 7:00 a.m. to 4:00 p.m. at Bryan Municipal Utilities, 841 East Edgerton Street, Bryan, OH. The Project is located in Williams County, Bryan, Ohio in the Stark’s Meadowbrook Addition.

Bid Scope: The contractor is to supply construction labor, equipment, safety measures and supervision to complete the project as outlined in the Contract  anual. The project scope consists of installing an estimated 2,750 feet of 2” conduit for placement of primary underground cables, 835 feet of 3” conduit for placement of secondary triplex underground cables and new transformer fibrecrete box pads. The project also includes installing 3” conduit sweeps from the new  transformer box pads to the proposed locations of the new secondary pedestals (BMU to install), and to clean and restore all surface areas, following contract requirements, and as further detailed in the Contract Manual. BMU is to supply construction materials such as, but not limited to, conduits & couplings,transformer box pads and secondary pedestals.

No bidder may withdraw his bid for a period of 60 days after the scheduled closing time for the receipt of bids. The successful bidder shall pay each worker employed by said contractor and cause all subcontractor(s), or other person(s) about or upon the public work, to pay at least the minimum prevailing wage rates on this City of Bryan, Williams County public improvement as determined by the Ohio Department of Commerce Division of Industrial Compliance, Bureau of Wage and Hour Administration. (ORC 4115.06)The Board of Public Affairs of the City of Bryan, Ohio reserves the right to reject any and/or all bids and to waive any irregularities in the bidding. The estimated cost of construction is $84,223.70.Dated: March 1, 2019 By order of the Board of Public Affairs Bryan Municipal Utilities, City of Bryan, Ohio Kevin Maynard Director of Utilities

By submitting this form to BMU, you agree:
*To be publicly listed with your contact information on the Project Plan Holders List.
*It is your responsibility to review the bid site for addenda before bid submission.
*BMU is not responsible for electronic or printed reproductions of the project files obtained from the project bid site. Contractor shall assume all responsibility for ensuring that all electronic and printed reproductions of project files are complete and printed to the correct scale.

*Note: You will need to resubmit the BMU Bid Request Form to access each new project. Once granted access, your same username and password will be utilized.

For security, requests are reviewed and verified before access is granted. Please allow up to three (3) business days for processing.

US Department of Labor – www.dol.gov/